During September we had about ten days of hazardous air quality from fires in California and Oregon. I learned all about the Air Quality Index. It goes up to 500 (extremely hazardous), and we were between 450 and 500 for five days or so. The other five days we were merely very unhealthy or unhealthy. During the worst times, you really couldn't be outside for longer than half an hour or so. My eyes burned and teared up, and my asthma (normally not even an issue) flared up badly. Your clothes and hair would reek of smoke. 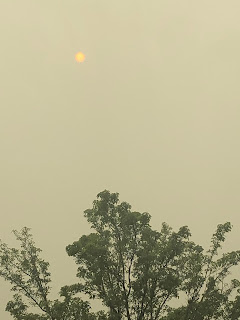 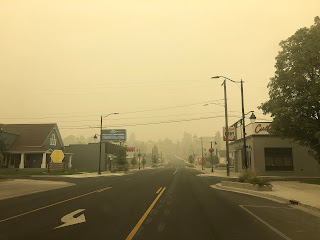 Of course, there's nothing to do for the horses except keep an eye on them. You certainly can't work them when the air's that bad. Dakota is always a bit of a cougher when you first start lungeing/riding him, so I was especially worried about him. But they both seemed to weather the miasma just fine. There are many recommendations on how long to wait before bringing your horses back into work post-smoke-inhalation. The two I saw repeated the most often were a) two weeks or b) the same amount of days as the horses were exposed. I went the conservative route and waited two weeks, and then I brought them back very slowly: handwalking and tack walking, slowly adding a bit of trot, then canter, and keeping exercise periods short. Thank goodness we didn't have, on top of the smoke, actual wildfires nearby.

I've picked up a maybe-client with a young OTTB, so we'll see how that progresses. The gelding could do with twelve weeks on the lunge, just learning to relax and pay attention. He's smart and sweet, but also tense and easily distracted. He has great gaits and lots of potential!
Posted by halfpassgirl at 2:19 PM 1 comment:

For the longest time (two years, I guess) I've been thinking that I was done with this blog. I was posting most content to FB, and that seemed like enough. Additionally, my bestest dressage friend, trainer, and almost-mom, Suzanne, passed away from cancer in April 2019. It was, and remains, a huge blow, and my grief is almost as enormous as when my father passed. I'd known her since 1995, and she and I were so utterly sympatico, especially when it came to dressage (and senses of humor). I used to text her several times a week for help with my training, and she always, always answered with long, detailed missives that covered both the practical side of things and the theory. I miss her so much. Her loss has affected my riding for the last 15 months -- it's not that I haven't been riding, but it's been much reduced, and I have no trainer. Even the notion of going to clinics sparked more grief. I'm finally starting to exit the fog. Clair and Dakota are enjoying their own private pasture at a lovely, local, mostly-Western facility. And I'm getting my mojo back. 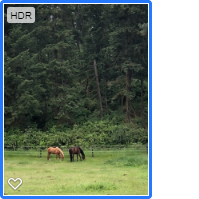 Not long after Suzanne passed, my husband and I decided to move back to the Pacific Northwest to be closer to his elderly mother. Housing was most reasonable in Spokane, so that's where we ended up. I love it here. Mountains, and about 100 crystal-clear lakes within an hour's drive. It's a very hip, cool city, with great restaurants and breweries. The Spokane River runs through the middle of downtown. In the fall we saw, one after the other, Tig Nataro, Jason Mraz, and Colin Hay. We bought a 120+ year old Victorian farmhouse north of downtown and are slowly fixing it up. It's adorable. We also bought two used angling kayaks and have been going fishing a couple times a week -- what a fun option during the pandemic!

I initially took a job at a sheet music publisher. It was a private, two-person business: the owner and me. I enjoyed the work very much, but after five months I had had it with the owner's assholery. He seemed to get a kick out of being a jerk to me. So I quit and have been freelance editing ever since. I'm also applying to jobs here and there, but the unemployment rate is so high that I have zero expectations. Maybe if we ever get this pandemic under control the employment market will normalize. It's also been kind of hard to move to a new city and then have lockdown occur a few months later. I've met some people through the barn, but most of the ways I'd go about making friends (work, exercise groups, social groups) are not currently an option. Luckily my husband and I are still getting along great!

I hope to eventually take on some dressage/equitation students, but I know that kind of thing just takes time. You have to establish your reputation. I had so many students when I left Lubbock -- I wish I could have brought them all with me! I'm sure as I start riding regularly again I'll be able to attract some business.

Anyhoo, that's where I've been.

Posted by halfpassgirl at 1:07 PM No comments:

I haven't posted since the spring -- boo! And so much has happened since then! In addition to giving lessons at the barn where I keep my horses, I'm also now the head instructor at a Western barn south of town. I started that gig in July and it's really taking off. I'm basically just teaching dressage fundamentals in a Western saddle. I have two lovely school horses to work with: Yeller, a very elderly palomino with a crazy sway back, who takes care of the little beginners (but still has a lope in him!), and Mojo, a nicely-put-together, solid little paint who does it all, from toting around beginners to becoming a zippy little sports car for the more advanced folks. I am very proud of a recent creation of mine: I sewed a fluffy bed pillow to the underside of a Western saddle blanket to fill in the gap in Yeller's extreme swayback. I think he'll be a lot more comfortable now that the saddle won't be bridging.

J., the awesome grad student who had been leasing Dakota, had a sudden opportunity to study in Australia, so in addition to Clair I'm riding Dakota full time as well. Dakota is schooling all of second level, and Clair is schooling all of third level. Clair threw out a crazy double spook in early June and dumped me hard. I fell with my full weight on the back of my left ilium, and boy did it hurt. Luckily I didn't fracture my pelvis. I did pass out later in the day and fell face forward onto my jaw, knocking it sideways out of alignment for a few days. But I was back in the saddle after a week! The injury did slow me down a bit, riding-wise, for part of the summer. I'm still stiff and sore but better every day.

Clair's trot half pass is just super these days. I also have a reliable, decent medium trot. At third level they want extended, so we'll just have to see how we score. Canter half pass is starting to come. The canter overall is becoming highly collectible. On the lunge she's offering pirouette canter. I've decided to push my third-level score attempt to a show in the spring. We might be able to squeak our scores this fall, but I'd like to feel solid. The next Suzanne & Gwen clinic will likely be in early October.

My husband and I successfully sold our last flip and bought the next one in mid-June. We've been working on it like mad and hope to have it on the market in 3-4 weeks. Hard work, but so fulfilling!
Posted by halfpassgirl at 2:06 PM No comments:

Cleaning up the flying changes

Clair's flying changes have gotten so obedient and calm! It has been a solid year since we started working on them. During that time the canter sort of fell apart and then came back together again, bigger and stronger. At one point I dropped working on flying changes for six weeks and went back to simple changes through walk to get the feeling of the half halt back into the canter. At one point I thought I would never get the change right to left. Now, right to left is her better, cleaner change! Left to right is slightly sticky but so close to correct. I see in this video that I'm behind the motion again (argh) so that may be the problem. I'm also working on asking for the change a hair sooner -- during the third beat of the canter. Fixing my shoulders has also made a world of difference. When you twist your torso to follow the horse's shoulders, you have to remember to keep your arms independent (outside arm must go BACK to keep the outside rein, inside arm must go FORWARD to give the inside rein).

This sport is hard. But so rewarding!

Posted by halfpassgirl at 8:49 AM No comments:

In other news, Dakota is finally developing a respectable canter.

Posted by halfpassgirl at 5:21 PM No comments:

halfpassgirl
Spokane, WA, United States
Born in 1971, I've been obsessed with dressage since 1994. I own an Oregon mustang gelding and a Dutch warmblood mare. I'm working towards my bronze medal (just my third level scores left). My husband and I have four dogs, and I work as a freelance editor. I am also a dressage trainer.